The 10 Greatest NFL Players Without a Super Bowl Ring Winning the Super Bowl and lifting the Lombardi Trophy is undoubtedly the greatest moment in the career of an NFL player. It is the highest proof of greatness that a player can have over the course of his playing days. In the history of the league, players like Tom Brady and Peyton Manning have risen to such a level that was possible only because they have the Super Bowl rings to show for it.

However, winning the Super Bowl is by no means an individual honor. Every team member has to display sheer tenacity, unity, and determination to emerge as the victor at the end. That is why many critics rate the Super Bowl ring higher than an MVP award when it comes to a player’s accomplishments. Producing match-winning performances in every game against every opposition is a very difficult task, and only a handful of players have managed to pull it off.

With the advent of the new season on the horizon, we take a look at some of the greatest players who were never able to win the big show.

Generally, players on the offensive spectrum are given more attention on the football field. However, Bruce Smith was one of those players who commanded attention and respect as soon as he stepped on the field, despite being a defensive end. His game awareness was second to none and it showed when he took on the opposition runners.

A Hall of Fame inductee, Bruce Smith is the NFL’s all-time leader with 200 sacks to his name. “The Sack Man” as he was affectionately called, was part of the iconic Buffalo Bills side from 1991-94. As luck would have it, Smith could never lift the Lombardi Trophy despite coming so close to it on a couple of occasions.

When it comes to currently active running backs, Adrian Peterson will always be on the top of his game. Surprisingly nimble for his size, Peterson is able to weave through defenses at will and is seldom outplayed. In fact, he is the only active player to feature on our list. However, at the age of 35, time is slowly dwindling away for the Detroit Lions’ RB.

Being compared to Barry Sanders is an achievement that speaks for itself, and Peterson has faced these comparisons ever since his debut. Despite making it to seven Pro Bowls, “All Day” has never made it to the big show. That might have something to do with the Lions’ infrastructure and squad. When compared to other franchises, the team lacks the necessary depth to become a title-challenging side.

Here’s hoping that Peterson gets to win the Super Bowl before he decides to hang his boots.

The name Eric Dickerson itself is enough to trigger nostalgia in the minds of NFL fanatics. A running back in the purest sense of the word, Dickerson was legendary in everything he did. Ranging from his iconic goggles to the style of his play, everyone around him was aware of his eccentricity and the way he functions.

“Mr. Benny” holds the record for the most rushing yards in a single season with 2105. That season, every opposition defense had a hard time keeping him in check. In fact, the Rams team of 1984-85 was quite good in every aspect of the game. How they couldn’t manage to get to a Super Bowl still eludes many.

Many people consider Dickerson as a one-season wonder because of his achievements in 1984. In reality, the facts show quite the contrary. Eric Dickerson had one season where he was simply unplayable, but he was very influential in all the other seasons he featured. Moreover, his Hall of Fame induction speaks volumes for his talent and skill.

The perfect amalgamation of skill and technique, Tony Gonzalez is arguably one of the greatest tight ends to ever grace the game. Sure Rob Gronkowski and others have ushered in a new style in that position, but Gonzalez will forever hold his own class as one of the pioneers of the game. However, Gonzalez could never win a Super Bowl despite having such an illustrious career.

Tony Gonzalez not winning a Super Bowl is a classic case of the good player playing for an average franchise. Both the Kansas City Chiefs and Atlanta Falcons were never one of the teams who could challenge for the title. As for the Chiefs, they did not have the proper infrastructure in place (which they do now, ever since the advent of the Patrick Mahomes era), and the Falcons simply lacked depth.

However, not having a ring is in no way tarnishing the legacy of the stalwart.

Ever so often in the NFL, a player emerges who is a delightful concoction of skillful and eccentric. In the recent era, Terrell Owens has been that player. He was known to be superfluous and very determined. However, one of the most positive qualities of Owens was that he left it all out on the field. A fighter in the truest sense of the word, Owens had an illustrious career in the league. Unfortunately, he lost in the only Super Bowl he was featured in.

A player does not have 153 touchdowns without being ridiculously good at what he does. Owens was one of the best during his playing days. With almost 16,000 receiving yards to his name, “T.O” was a beast in his prime. Moreover, he was able to keep his form up for 15 seasons, which is an achievement in itself.

When you are widely considered as the greatest running back in the history of the NFL, you must have incredible personal accolades along with a couple of Super Bowl rings. However, that is not the case for LaDainian Tomlinson. Sure he can check the box when it comes to personal awards, but he was never able to win the big show in his career.

Tomlinson still holds the record for having the most points scored in a single season with 186. Moreover, he also won the prestigious MVP award in 2006. And yet his legacy does not have a Super Bowl victory. However, a Hall of Fame induction might be enough to suffice his doubters. LaDainian Tomlinson’s legacy will remain untarnished irrespective of the presence of a Super Bowl ring.

Another one of the modern greats, Barry Sanders was a force of nature. For a person of his size and structure, he was surprisingly nimble in his movements and that caught quite a lot of defenders off guard. Sanders used it to full effect and capitalized on their mistakes. He was arguably the one who influenced the current crop of RB’s in the league

Sanders was the first player to rush for 1000 yards in 10 seasons. A Hall of Fame inductee, the closest he came to the Super Bowl was the NFC Championship Game which he lost against the Washington Redskins in 1992. However, there is no denial about the fact that Barry Sanders is one of the greatest offensive players in the game.

His dedication and determination were unparalleled during his time and even now, only a handful of players have been able to match his work ethic. 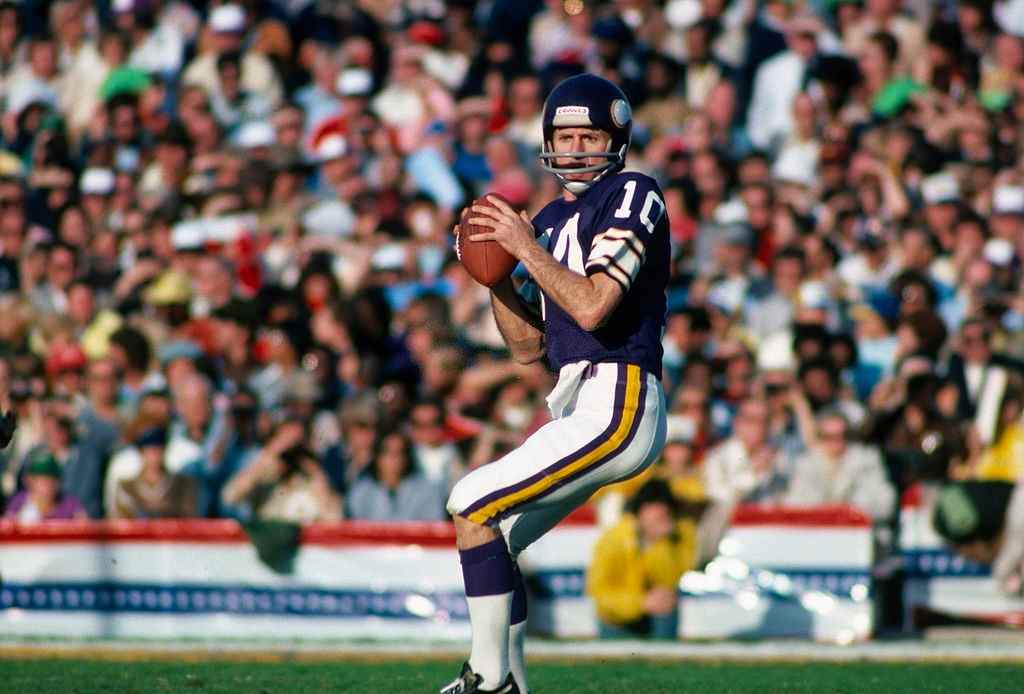 The ’70s were a difficult time for QBs in general. Powerful defenses used to hagger them and never let them get in their stride. Despite all of this pressure, Tarkenton emerged as the victor and made his passes with relative ease. During his prime, he was considered one of the greatest quarterbacks in the league.

The reason behind Tarkenton for not winning the Super Bowl might have something to do with himself. In each of his three appearances, he was a shadow of himself and his performances were abysmal. In fact, many people consider him as the culprit behind the Vikings not winning the big show.

The fact that Jim Kelly does not have a Super Bowl ring seems unbelievable. One of the greatest quarterbacks of his generation, Kelly led the Buffalo Bills from the front every time they stepped onto the field. The dominance he had over the entire league was a thing to behold. His hall of fame induction was based solely on his dominance over opponents. 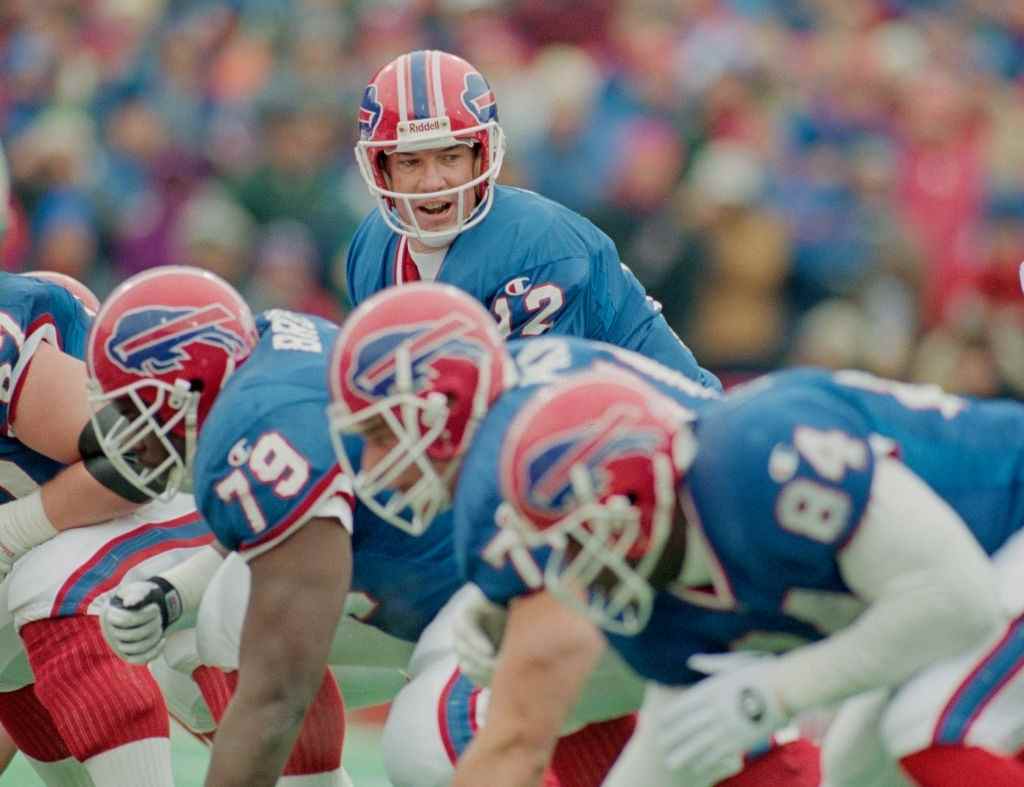 The peculiarity arises when it is known that the Buffalo Bills went to the Super Bowl four consecutive times, but never managed to win the game. One of the greatest defensive sides of that era, the Bills looked overawed by the spectacle and could not produce performances worthy of winning the Super Bowl.

However, Jim Kelly will forever be known as one of the pioneers of the modern QB style in the NFL.

For the Miami Dolphins and the NFL itself, Dan Marino was the face of everything. Arguably one of the greatest quarterbacks in the history of the league behind Tom Brady and Manning, Marino was the epitome of skill and flamboyance. He had a certain swagger around him in every game. For Marino, losing was never an option and it showed in his intensity.

With him on board, the Miami Dolphins became a force to reckon with. However, they could not convert their dominance into a Super Bowl victory. There were many factors that played their part, not the least of which was that their defense crumbled in every playoff game.

Nevertheless, Dan Marino’s legacy will forever be defined as the prolific quarterback who was a menace for every opposition because of his skill and temperament